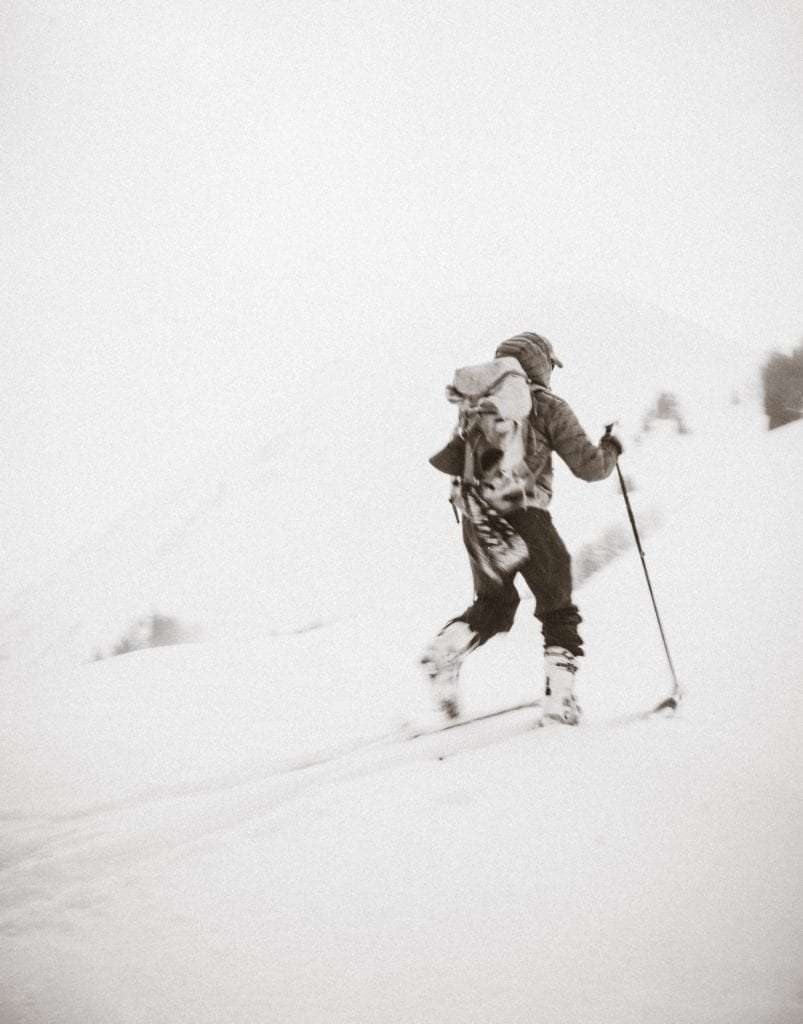 The 2021/2022 ski season marked the 60th anniversary of the Breckenridge Ski Area. In addition to some of the best skiing and riding in the United States, Breckenridge has bestowed us with an extremely rich history over the past six decades. It even created the unique community we have the privilege of experiencing today.

The beginnings of modern skiing appeared during the Pikes Peak gold rush in the very early 1860s ­– skiing then was almost entirely for transportation.

The equipment differed completely from what is seen today on the ski slopes.  Skis were actually called snowshoes.  Made from wood, most skis measured 10 to 12 feet in length.  Skiers steered and stopped with a single pole dragging behind them.

Father John Dyer probably best exemplified this type of ski transportation.  He skied between towns during the winter to both deliver mail and preach sermons.

In 1910, a Norwegian named Peter Prestrud (who lived in Frisco) introduced what became a popular local sport ­– ski jumping.  It became so popular that just after World War I residents constructed ski jumps near old Dillon, in Breckenridge, and elsewhere in the county.

In 1919, Anders Haugen, a famous Norwegian skier, jumped a world record of 213 feet at the Dillon jump located near the present-day overflow outlet of Dillon Dam.

In the mid-1930s, the Hoosier Pass ski area opened and hosted skiers until the early 1940s.  To this day, you can still see remains of the two parallel cleared runs to the left of Highway 9 as one ascends Hoosier Pass.

But the real story of modern skiing in the county began about 1959 when Wichita, Kansas-based Rounds and Porter Lumber Company looked into the possibility of acquiring land in Summit County to build a year-round, second-home recreational community.

Rounds and Porter were not only sources of lumber products but also real estate developers and oil and gas explorers.  Lake Dillon and the potential of a water-based, summer recreational community attracted the company.

Fairly early in the company’s study, an exploration geologist named Bill Stark approached the lumber company with the belief that the mountains around Breckenridge offered the potential for winter activities to compliment the summer activities possible at Lake Dillon.

While spending time in the Breckenridge area prospecting and collecting specimens, Stark realized the excellent possibilities for a ski area.  Bill Rounds, when skiing that winter in Aspen, recruited the services of two Norwegian ski instructors to help evaluate the potential of Breckenridge.

The Start of Breckenridge Ski Area

Depending on what one considers a “run,” either six or seven original runs (Springmeier, Rounders, Swinger, Crescendo, Four O’Clock, Boreas Bounce, and Ego Lane) awaited skiers at the new area.  (The ski area no longer uses the last two names and two of the original names are now also in slightly different locations on the mountain.)

Over the years, crews cut many more trails and built more lifts on Peak 8.  Peaks 9, 10, 7, and 6 opened in subsequent years (in that order).  The Bergenhof Restaurant on Peak 8 served its first customers during the 1961-62 season; Vista Haus began operating during the 1997-98 season.

Peak 9 (originally named Royal Tiger Mountain) opened for the 1971-72 season with the Eagle’s Roost restaurant and was subsequently re-named the Peak 9 Restaurant. It first provided meals during the 1973-74 season.

Peak 10 came next, during the 1985-86 season, with the TenMile Station restaurant welcoming diners during the 1998-99 season.

Other notable dates at Breckenridge include the inauguration of the Peak 8 SuperConnect, connecting Peaks 9 and 8 in an easy transit during the 2002-03 season; and the construction of the BreckConnect Gondola for the 2006-07 season.

A look at how the Breckenridge trail names originated offers an interesting perspective on both the history of Summit County and the Breckenridge Ski Area.  The resort is a bit unique among ski areas in the United States in that most of the resort’s trail names actually mean something and come from somewhere.

Many originated in local history; some refer to early ski area characters or events; and still others reflect the personal whims of early locals such as Briar Rose, Silverthorne, Springmeier, and CJs.

For more information about the town of Breckenridge and it’s history, click here.