Summit County Ski Season Is Off To An Incredible Start

According to Henceroth, A-Basin was exactly where it wanted to be before the pandemic halted the season in March 2020. After ditching the Epic Pass, Henceroth reported a 35 percent decrease in skier visits that month – A goal he set out to achieve for the ski area and its loyal patrons.

Henceroth stated that he wants A-Basin to be full but not overcrowded, and that the ski area has already sold 90 percent of the season passes it plans to sell.

A-Basin was the first Summit County ski area to enforce vaccinations for staff – a decision that Henceroth did not take lightly. He also said that he believes it is the best way to keep employees and customers safe in order to maintain day-to-day operations.

The traditional all-in-good-fun competition between A-Basin and Keystone Resort proceeded as usual with A-Basin clinching this year’s victory opening five days before its annual rival. (A-Basin opened on October 17 compared to Keystone’s October 22 opening day). The early opening of both resorts provides Summit County locals and homeowners access to world-class skiing in October. 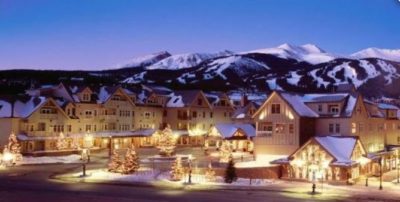 Regarding crowds, Churich stated that the resort is attempting to educate guests about the mountain’s flow and the optimal area for each individual to ski.

Breckenridge Ski Resort executives are also planning to celebrate the 2021/2022 ski season as the resort’s 60th anniversary. They want everyone to attend this milestone birthday party by shredding the mountain’s ten spacious peaks.

It was also announced at the COO breakfast that another local world-class ski area, Copper Mountain Resort, will get rid of its COVID reservation system this season in order to preserve the guest experience. This is in addition to several other upgrades Copper is launching this season.

Masks are required indoors at Loveland this season, and only half-day ski and ride lessons will be available. These precautions will be reevaluated at a later date this season.

Inntopia representative Katie Barnes also spoke at the COO event and discussed anticipated lodging occupancy numbers this season. According to recent data, available rooms in Summit County are down due to recent record real estate sales in Summit County.

Due to ever-increasing property values and investment potential, more individuals are choosing to buy Summit County homes. More than ever, buyers are seeing the value in purchasing a local property to utilize as a second home or primary residence.

It goes without saying that ski season in Summit County is back in action with exciting new changes and additions at each local resort. Let Real Estate of the Summit help you make our winter wonderland your home away from home. Contact us today for information on Summit County real estate!